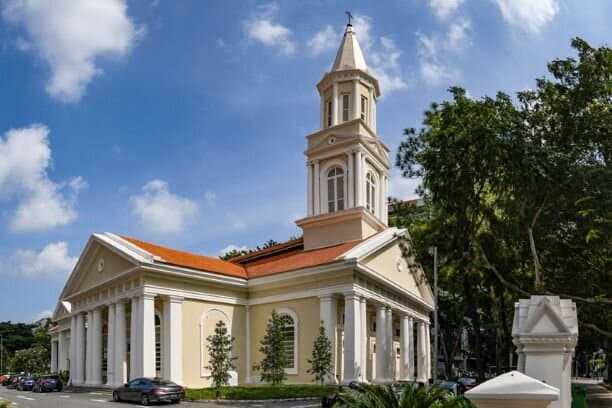 A Guide About Cathedral of the Good Shepherd

The Cathedral of the Good Shepherd, located in the Museum Planning Area of the Civic District, is the oldest Catholic church in Singapore.

The Cathedral gets surrounded by covered gardens bordered by parallel Queen and Victoria Streets and Bras Basah Road. Cathedral of the Good Shepherd architecture gets influenced by two well-known churches in London, St. Paul’s, Covent Garden, and St. Martin-in-the-Fields.

The Cathedral of the Good Shepherd serves as the archbishop’s residence and the cathedral church for the Singaporean Roman Catholic Archdiocese. The relics of Saint Laurent-Marie-Joseph Imbert, who gave the Cathedral its name, are fittingly kept there. Bishop Edouard Gasnier, the first bishop of the restored Diocese of Malacca, is buried there.

Architecture in the Renaissance style creates the Cathedral of the Good Shepherd. Tuscan columns with ornamental accents encircle the building. Charles Andrew Dyce created the cross-topped church steeple, which has two distinct portions. The bases of the first and second sections are square for the first and octagonal for the second.

Six entrances to the church. One, however, is not accessible to the general public. One of the numerous features is the crucifix Housed in the inner sanctuary, decorated with mosaic tiles. The area where the holy objects used in worship are stored is accessible through doors on either sanctuary side. The center of the wood ceiling gets elegantly decorated with distinct designs and dazzling lighting that dangle downward.

The ceiling gets once decorated with Victorian chandeliers since being replaced. The Cathedral also has numerous windows, which aid in appropriate ventilation. The gallery housing the Gallery Organ is off limits to the general public. There are statues of the Virgin Mary and Pope John II near the main entrance. Following the 2016 renovation work, a statue of Homeless Jesus gets placed in the west end, and the Good Shepherd monument gets relocated to the basement. The Archbishop’s House, the Jean Marie Beurel Center, the Cathedral Rectory, and the Resident’s Quarter are additional structures inside the complex.

A tiny chapel was constructed in 1832 to serve as Singapore’s first permanent house of worship for the Roman Catholic faith. It stood where the old Saint Joseph’s Institution structures once stood. A few years later, it gets determined that the chapel was insufficient to accommodate the influx of people, and as a result, the Good Shepherd Church gets established.

The site for the church, which encompassed Victoria Street, Bras Basah Road, and Queen Street, was suggested by Father Jean-Marie Beurel, the parish priest in charge at the time. The congregation was given cathedral rank in 1888. In 1897, the consecration ceremony took place. The cathedral current architectural features get gradually added throughout time. In 1973, it received national monument status in Singapore.

Regular mass timings are on Saturdays at 6 pm, Sundays at 8:30 am, 10:30 am, and 5:30 pm; Mondays through Fridays at 1:15 pm and 6:30pm-with the exception of the first Friday of the month, when mass is conducted at 7:30 pm instead. The holy marriage and confession sacraments get included in the list of other services.

Church of Our Lady

Church of Our Lady of Lourdes is a Catholic church in Singapore. It is located at Ophir Road in the Rochor Planning Area, within the Central Area in Singapore’s central business district.

St. Mary of the Angels

St. Mary of the Angels is a Roman Catholic church in Singapore completed in 2004. It is located in the Bukit Batok Planning Area, within the West Region of Singapore.